After a few days of exploring Quito’s museums and churches, I felt the call of the Andes (and a need for a change of scenery) so I hopped onto a bus – taking just a small bag of basic necessities with me – and headed towards the starting point for my first South American trek.

As the bus climbed through the mountains, my ears kept popping. Quilotoa sits at an altitude of almost 4,000 meters. More than a thousand of what I had been acclimatised to previously in Quito. 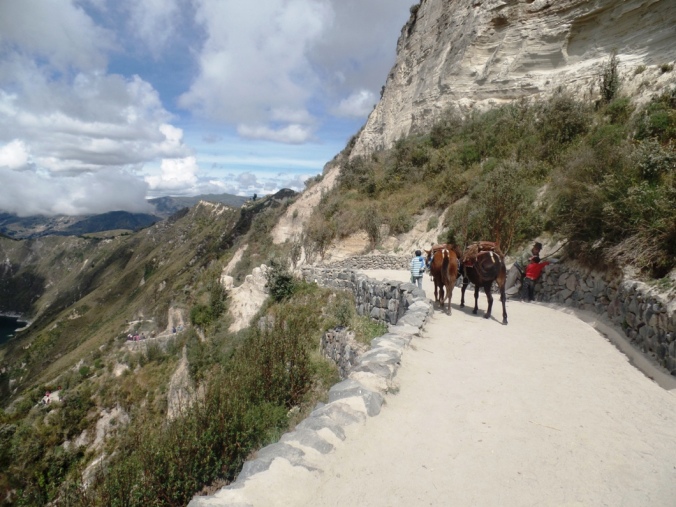 After checking into a hostel, there were still a few hours of daylight left, so I made my way down to the lake. Day-trippers, by the dozen, all had the same idea. Many of them carried by horseback. I felt sorry for the horses. You could tell some of them were tired. Although, to be fair, I noticed that the Kichwa women – clad in their traditional pleated shirts and dark hats – were handling their steeds with far more care and respect than the men, who whipped them whenever they showed strain and seemed – from both the features of their faces and attire – like they had moved to this area from cities, seeing an opportunity in the tourist boom. 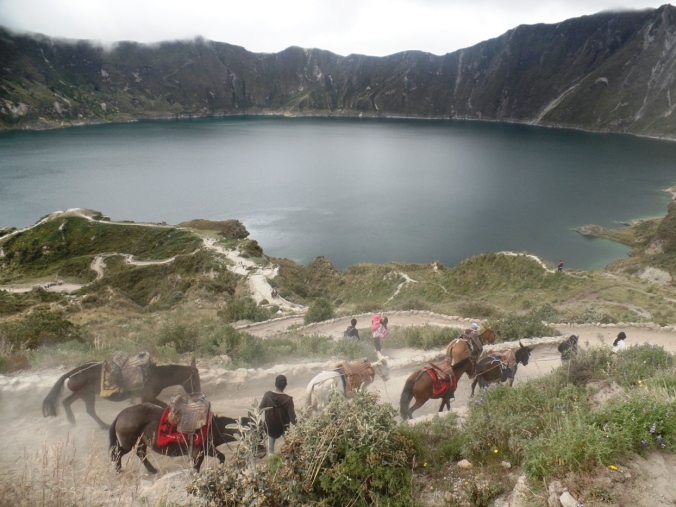 On my way down I passed a girl suffering from altitude sickness. She was barely conscious, and her father was trying to wake her up. I and some of the other passersby gave her water and coca sweets and eventually, she seemed to recover. 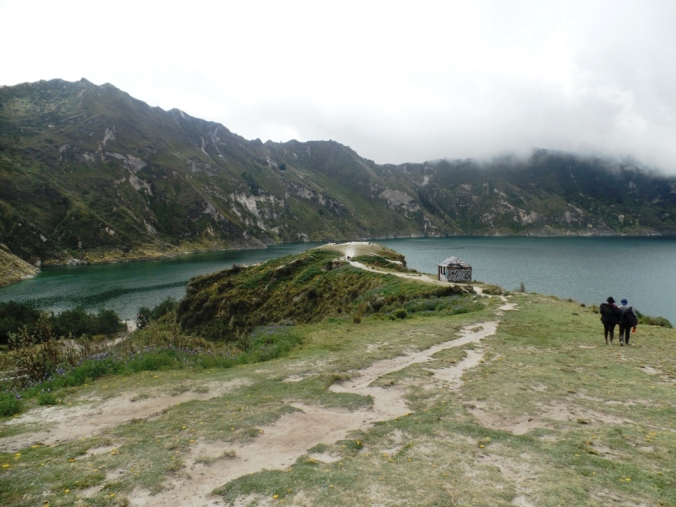 It was a remarkable transition, how quiet the village became later on when all of the buses drove off. There were only two other people staying in the guest house with me, and it was very cold that night. I was feeling a little light-headed because I wasn’t quite acclimatised, so I went to bed early.

By the morning I was feeling fresh and invigorated. I got up at the crack of dawn, ate breakfast, and set off early. 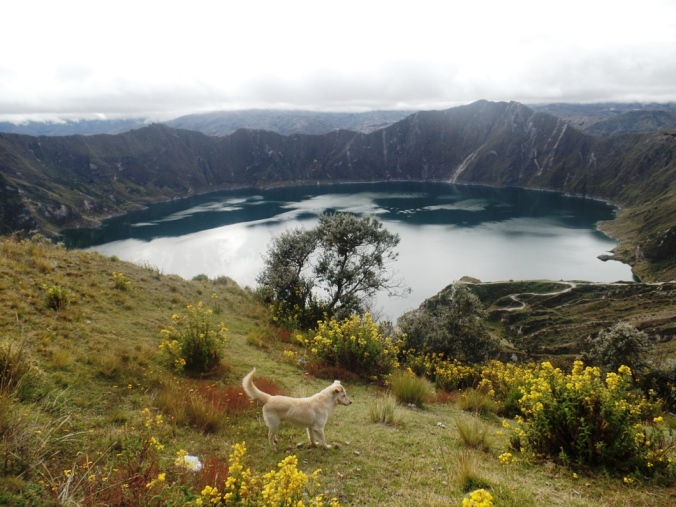 The first hour of the trek skirts around the rim of the crater, so I got to see more of Quilotoa. A dog followed me out of the village and became my companion for the journey. I called him Frank. 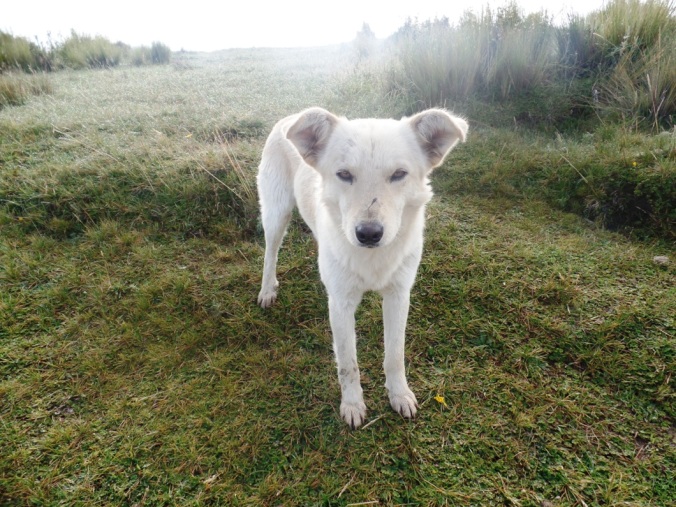 They say to carry a stick with you around this trek, and I found that to be sound advice. Not only was it good support for the steep descents, but I also used it to fend off dogs. I passed lots of them during the route and not all of them were as friendly as Frank. Some of them were very territorial and tried to block my path. I think I got hassled a bit less than most people though. Frank was a good ambassador. Often when we were approached he would intercede, they would sniff each other, and we would be allowed to pass. But on other occasions, I needed to wave my stick at them to get them to budge. 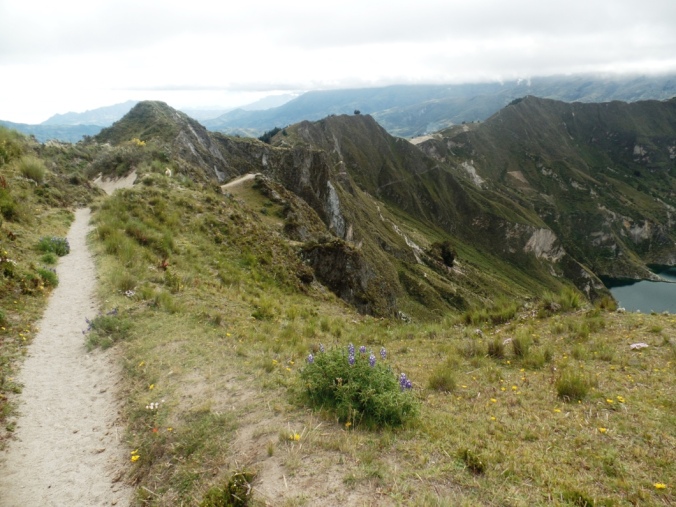 Climbing down the mountain towards a village called Guayama, the trail became difficult. We had to make our way down the canyon via a narrow series of ledges snaking down the face of a precipice. Apparently, this route was the new ‘safe’ one – the old one was destroyed in a landslide a year ago. I found myself fighting the same battle I am often faced when mountaineering; my sense of adventure in conflict with my fear of heights. 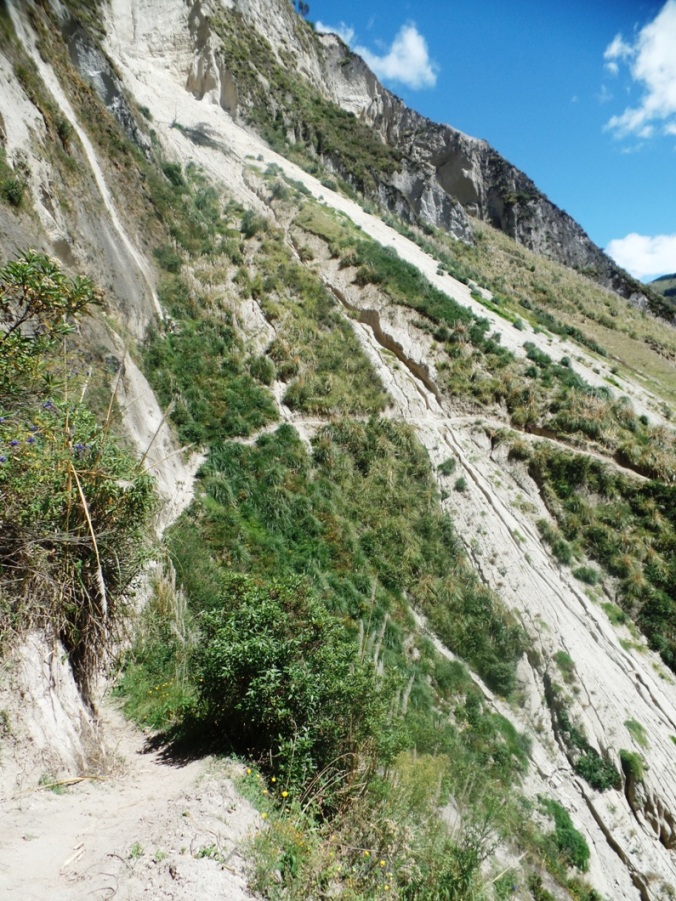 At its most terrifying – when I had to climb a steep and narrow section of a rather crumbly-looking ridge – I abandoned my dignity and resorted to crawling on my hands and knees. Shortly after, a young boy raced passed me and put me to shame. I realised that, to him, this was just a casual wander. 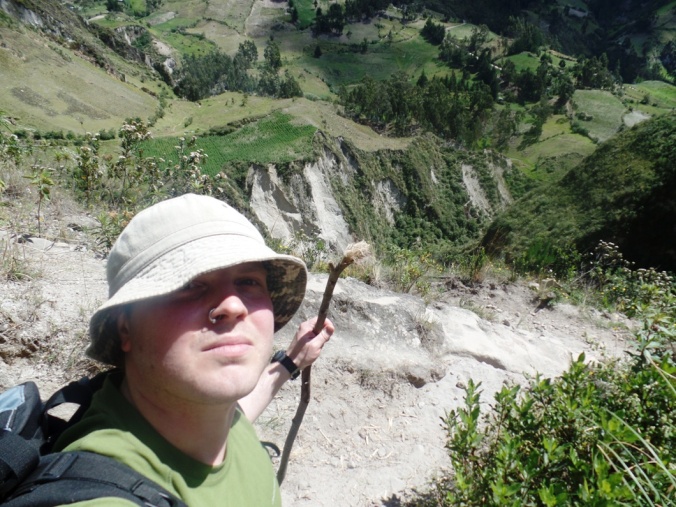 I guess you have to earn views like this though. 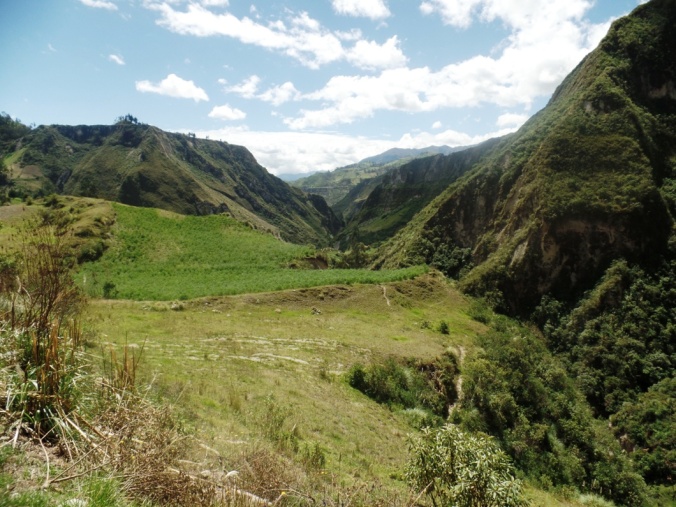 When I reached the bottom, Frank was waiting for me. I grew concerned for him as the day wore on. I didn’t know if he was a stray or belonged to someone. If he did have a home back in Quilotoa he had wandered quite far. It was a difficult thing to do – as I enjoyed his company – but eventually I tried to shoo him away, but it was no use. He remained loyal. 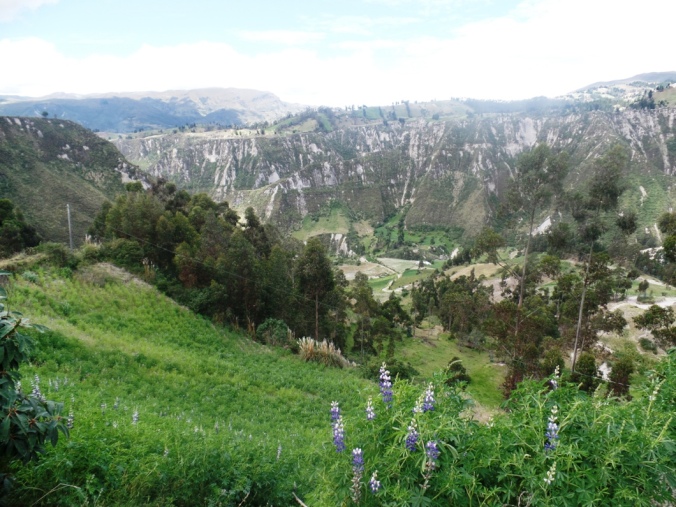 We clambered up the other side of the ravine. It was around midday, so the sun was strong. I took my time, reaching Chugchilan in the early afternoon. I claimed a bed at Cloud Forest Hostel. Aptly named, for that was the terrain I would be passing through the next day.

The following morning I set off again, but this time alone. I’d fed Frank the previous evening, and he’d lingered around the hostel but, by dawn, he was gone. I never found out if he had an owner. No one I asked seemed to recognise him. Perhaps he did have a home, and made his way back there during in the night. Maybe he had latched onto another hiker, and such was his wandering, nomadic lifestyle. I guess I will never know. 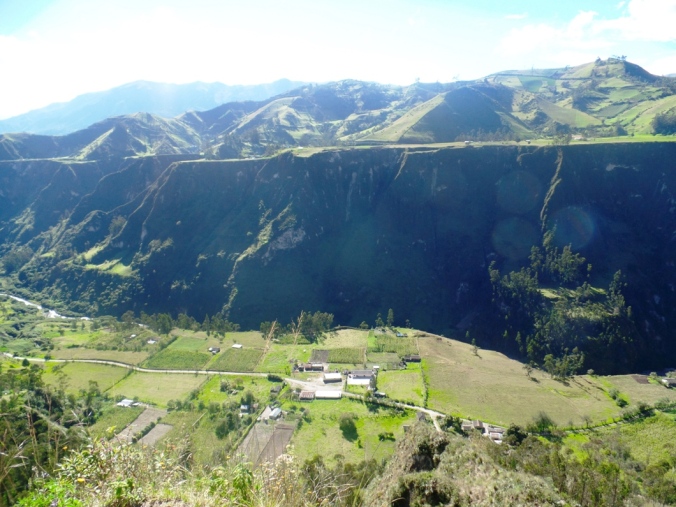 After a steep, downward climb, I was back into the ravine again, but a different part of it that day. I reached Itualo – a small village with a school – about two hours in and rested behind the shade of its church for a while. 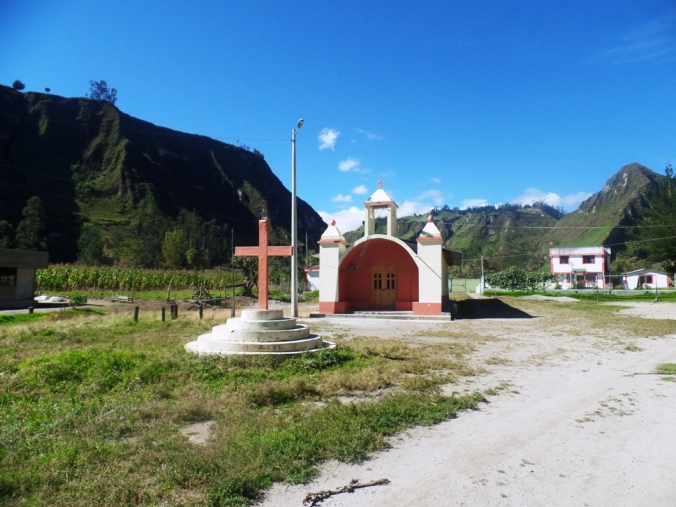 Snaking my way along the river – with mountains, farms, and patches of cloud forest on either side of me – I eventually reached a bridge, and it was time for a gruelling slog back up. 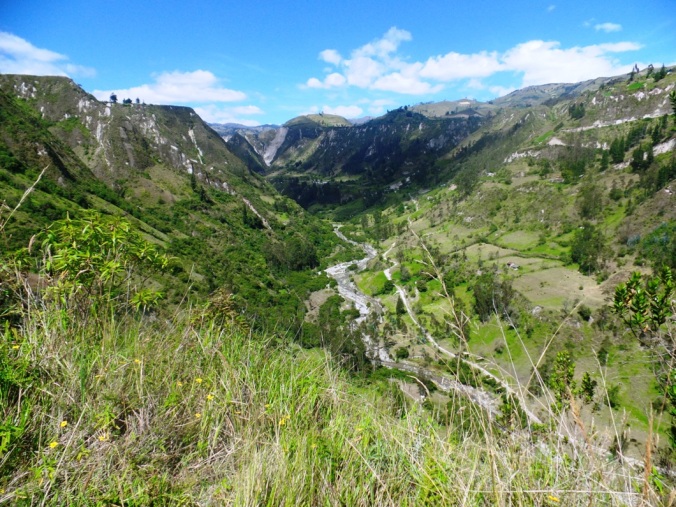 Once I reached the top I crossed paths with a French couple who were on their way down. We took pictures at the Mirador and swapped tips for the terrain which lay ahead of each other. 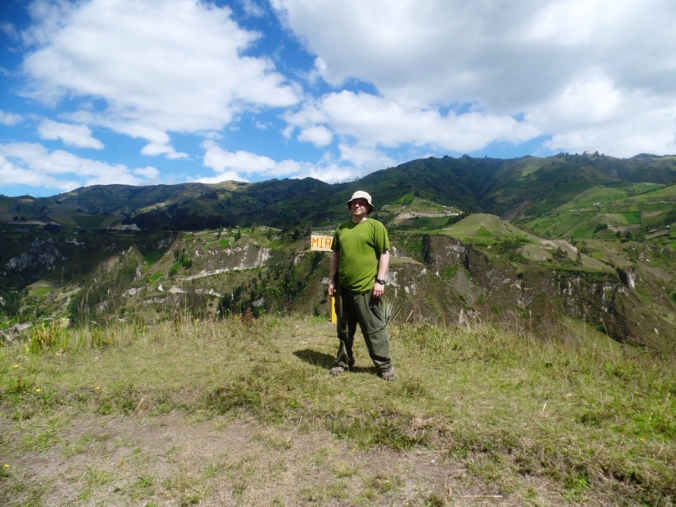 Curving across the side of one mountain, and then onto another, I came across a stream. It was the perfect opportunity to use my water filter for the first time. 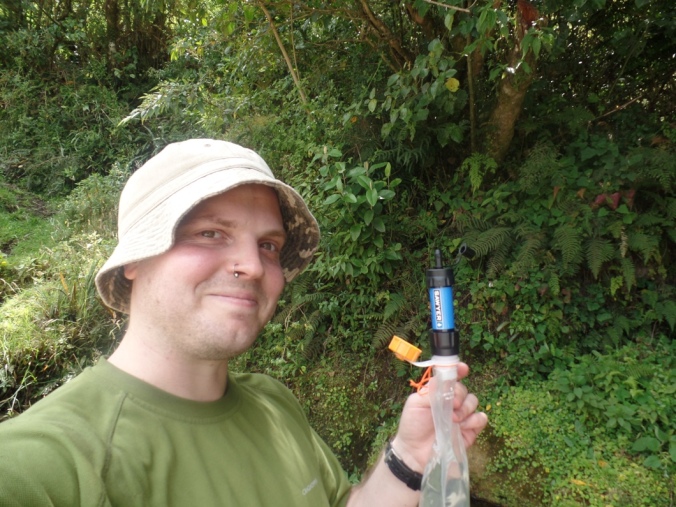 And, shortly after, I caught my first sight of Islinivi; my destination that day. 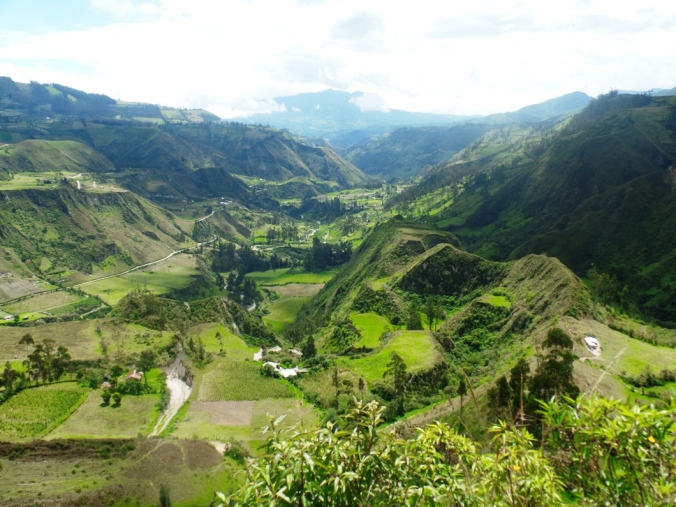 I reached there just after lunch and claimed a pallet at Llullu Llama Hostel, which was one of the best places I have ever stayed. Not only did it have wonderful views of the mountains, but it also came with a free steam room, Jacuzzi, dinner, and breakfast. All of the food was homemade (even the bread and cakes) and they kept filling our plates over and over again until we were full.

During most of the trek I had been suffering from hayfever – and for the first few days it had been bearable – but something happened during that night and it suddenly got really bad. I probably annoyed the hell out of the rest of the people in the dorm I was sleeping in, with my sniffing and sneezing.  By the morning, my eyes were all red and puffy. I had not slept much at all. I was tired, fed up, and felt like clawing my face off.

It was a shame because Llullu Llama was such a nice place I would have otherwise been tempted to stay a little longer, but instead I was forced to set off. It was the final day of the trek. 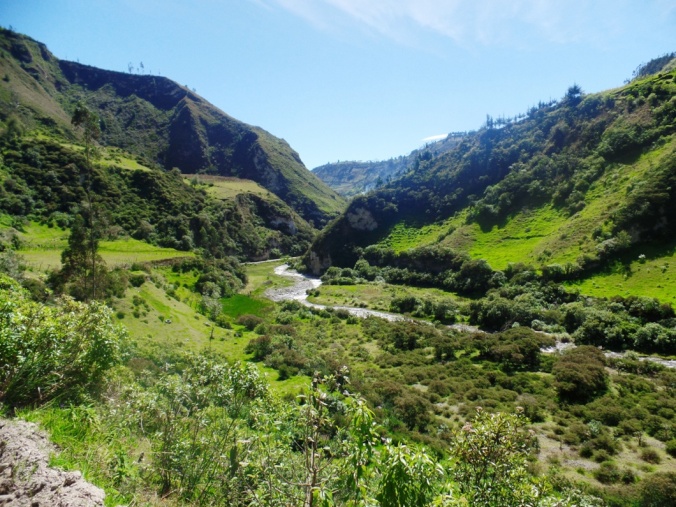 Perhaps it was because I was in a rush to get out of there, but this last day was the shortest yet and I arrived in Sigchos just three hours after leaving Islinivi. Most of the trail that day was through a scenic valley, but I wasn’t feeling very well and I’d been somewhat spoilt for scenery over the last few days, so I found this final stretch of the Quilotoa Loop a little underwhelming. 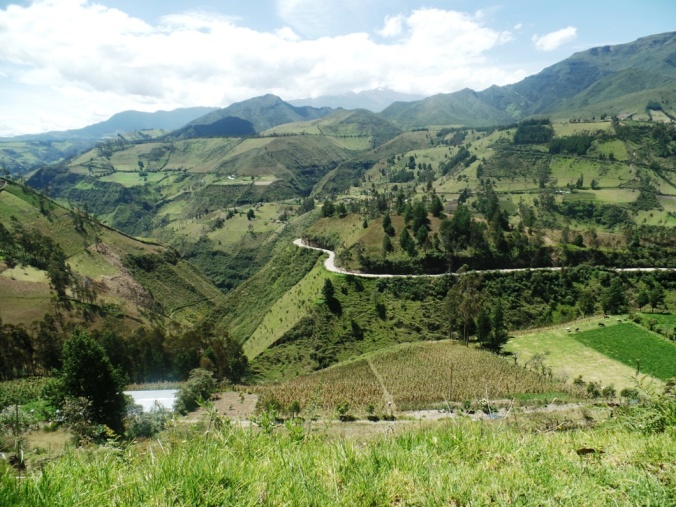 As soon as I reached the town, I marched straight to the bus terminal and bought a ticket back to Quito, hoping that the smog of the city might dilute the spawn of pollen sweeping through the Andes.

For more amazing photos from the Quilotoa Loop, click here!

One thought on “Travelblog SA#2: The Quilotoa Loop – Ecuador”