I didn’t sleep too well the night before leaving. Partly because I knew I had to get up early, and I think I was also excited and a little nervous too. I have done high-altitude treks before (such as Langtang Valley in Nepal and, more recently, the Quilotoa Loop) but during those, there were lodges to stay at.

This was my first time going it alone, carrying everything I needed to survive upon my own back. Still, Santa Cruz is supposed to be quite safe as far as altitude treks go, and it is also quite popular, so I knew I was likely to meet people along the way… 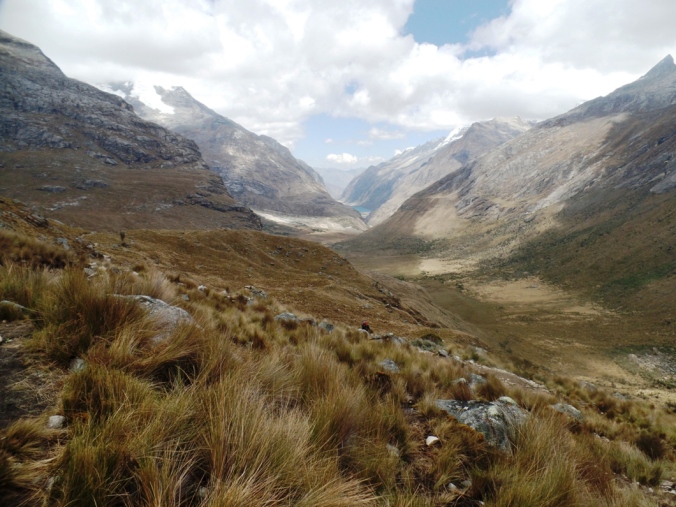 By 4am, I gave up on sleep. It was only an hour till I needed to leave anyway, so I showered, checked my backpack one last time to make sure I wasn’t leaving anything behind, and headed for the bus station.

I first had to catch a colectivo to Yungay, and then I transferred onto a minibus. The road to Vaquería – where the trek began – was rocky and narrow. It twisted through the Andes like spaghetti and took over three hours just to reach a distance no more than 40 kilometres away as the crow would fly. The views were incredible but unfortunately, we only made one stop during the whole journey, when a group of climbers departed, destined for something much more adventurous than myself. I took a photo of this view of Orkoncocha and Chinan Cocha Lagunas.

Once the bus pulled up into Vaquería, me and the other gringos got off and began hiking. A German guy called Simon seemed to have a similar pace to myself so the two of us walked together. 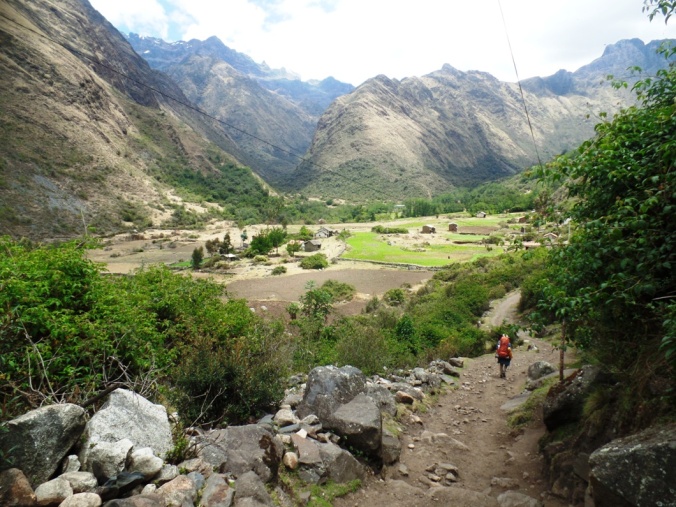 Most of that first day was a steady upward climb. We passed through a village and then into a valley. We reached Paria (the campsite most people stay the first night) at around 2pm and decided that, as there was plenty of daylight left, we would go further to give ourselves a head start for the next day.

The trail became steeper. The last hour was gruelling, but eventually we reached a campsite. An unofficial one recommended by previous hikers on the app Maps.me. A Spanish couple was already there, and later on, we were joined by a pair of Canadians.

I was feeling dizzy, so the first thing I did was make myself a big cup of cocoa tea with ginger. It made me feel better, but the altitude was affecting me. I discovered – after speaking to the others – that everyone else who had hiked this far up the mountain the first day had been in this area much longer than me, and some of them had even done other hikes. Two days ago, I had been in Lima (which is at sea level). I had jumped to over four thousand meters.

We ate supper together. They laughed when they saw my sleeping bag (which only had a comfort temperature of 4-8 degrees) and saying I wouldn’t survive the night, but the cold wasn’t a problem. I happen to know that an inflatable mattress – when inserted into a sleeping bag rather than placed beneath it – adds a few degrees of warmth.

No. The cold was the least of my worries that night…

As soon as I got into my tent, I had a splitting headache. I couldn’t sleep because my brain was all fuzzy. I realised I had altitude sickness. Which surprised me as I have broken the rules for acclimatisation much more dramatically in the past and always got away with it. I had a temperature too. I actually panicked for a while, because I took out my thermometer and it gave me a reading which was off the scale, but then I realised it must be broken. Otherwise, I would already be dead.

I took a paracetamol, but it didn’t seem to help. Later, I remembered that the Spanish couple had altitude sickness pills, so I woke them up. That made me feel a little better, but it was the early hours of the morning by then, and I realised I had passed almost the entire night without sleep.

By dawn, my headache had gone and I no longer felt short of breath. I had begun to acclimatise. I ate a breakfast of porridge and began to get ready. It rained during the night, so I had to pack away my tent still wet. 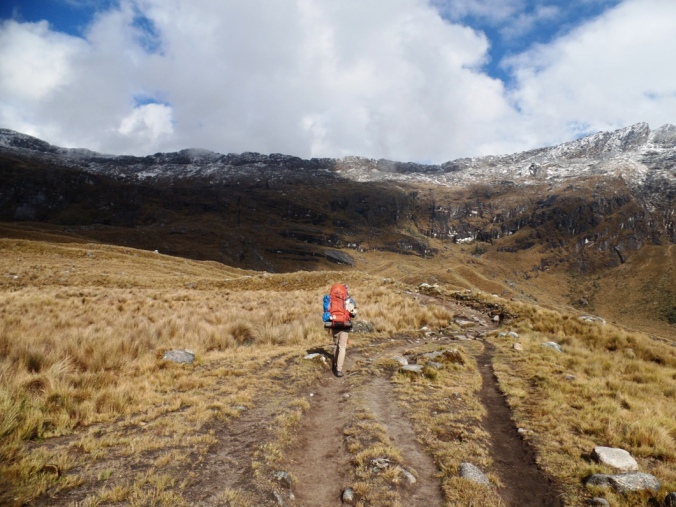 Simon and I carried on up the mountain. It was a steep two-hour slog up to Punta Union Pass – the highest point of the entire trail, at 4750 meters. We passed many lagunas on the way. 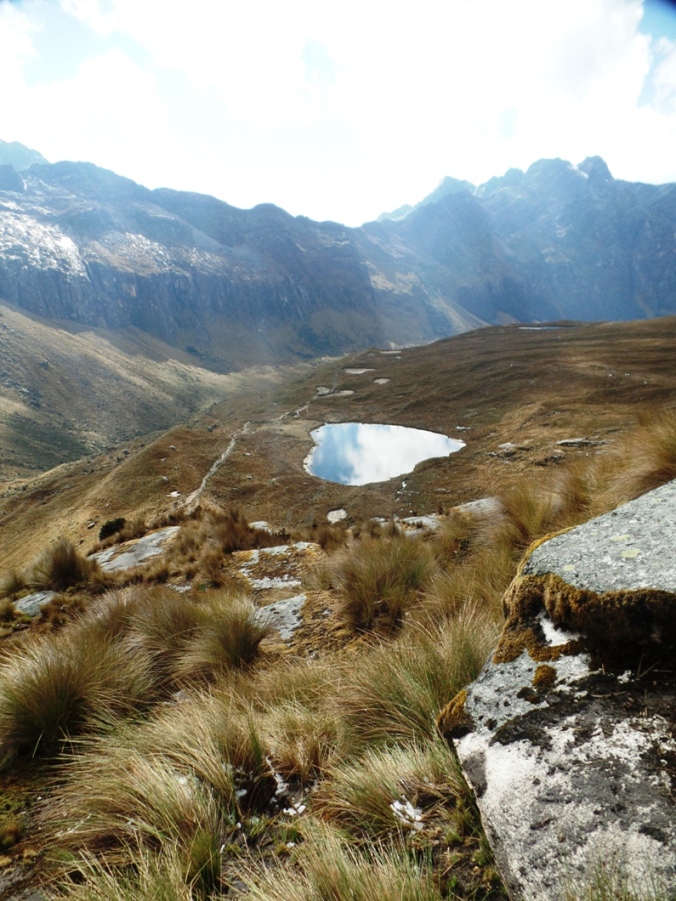 When we finally reached the top, we took a break and admired the view from both sides. I believed, back then, that most of the hard work was over. 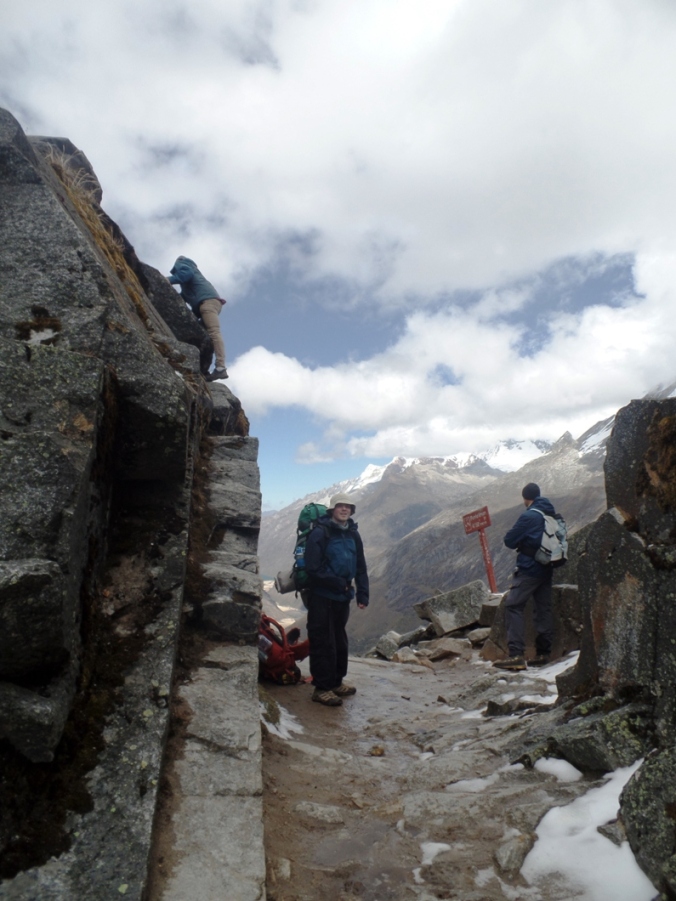 The views were spectacular that day. Towering white summits surrounded us as we made our way down the valley. We saw the iconic Artesonraju, the peak said to be the one used on Paramount Picture’s logo.

We reached Taullipampa campsite at around lunchtime. It was very windy, so putting up our tents was a frustrating process, but they needed to dry.

Being able to leave our things at Taullipampa that afternoon was a blessing, as it meant we could make the side-trek to Laguna Arhuaycocha with a much lighter load. This part of the Santa Cruz circuit turned out to be both a highlight and one of its most difficult challenges…

Skirting around the side of a mountain, we passed through into a grassy plateau. Beyond the trees, in the distance, I saw a steep incline ahead and I began to feel weary. I realised we were going to have to climb it. 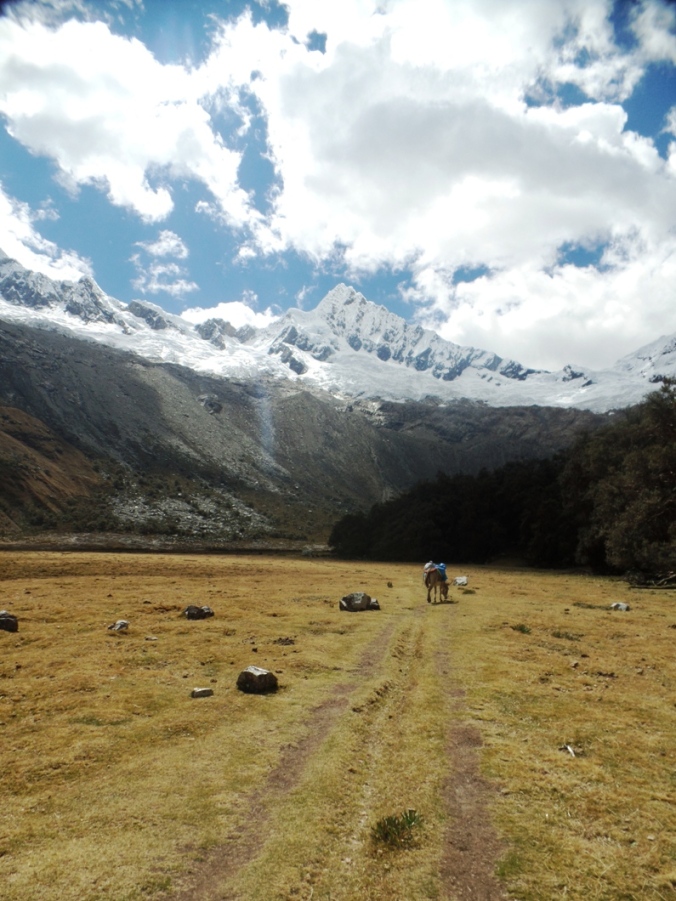 The altitude was giving me a hard time again and I kept having waves of dizziness and having to catch my breath. I told Simon to go on ahead. I would catch up. I considered giving up a few times, but I wasn’t going to have come all this way to just turn back.

It was worth it in the end. I reached the official mirador and looked for Simon, to see him waving at me from up a steep ridge he had climbed to appreciate the view from a higher angle. I wasn’t well enough to join him so I rested for a while and watched the lake. Every now and then, I kept hearing loud noises as chunks of ice from the glacier fell into the water. It sounded like thunder.

Simon stayed there a little longer than I did. I decended, hoping the lower airs would clear my head. We reunited by a stream in the plateau and refilled our bottles using my filter before heading back to camp.

After another cup of cocoa and ginger tea, I was feeling much better. I made a dinner of quinoa, sweet potato and peanuts in a spicy sauce, and ate it all. I climbed into my tent and slept very well that night.

I had to pack away my tent wet again in the morning. And I couldn’t be bothered to make porridge or tea, so I ate a breakfast of bread and cheese. Simon and I carried on making our way down the valley. Cashapampa – the village at the end of the trek – was just over twenty kilometres away but it was all downhill, so it was possible I would be drinking beer back in Huaraz that evening.

I passed through many different landscapes that day. Deserts. Moors. Forests. Dried up lakes filled with reeds. Even the remains of old villages which had been abandoned. The icy peaks of the Cordillera were replaced by waterfalls cascading down the steep ridges of the valley. 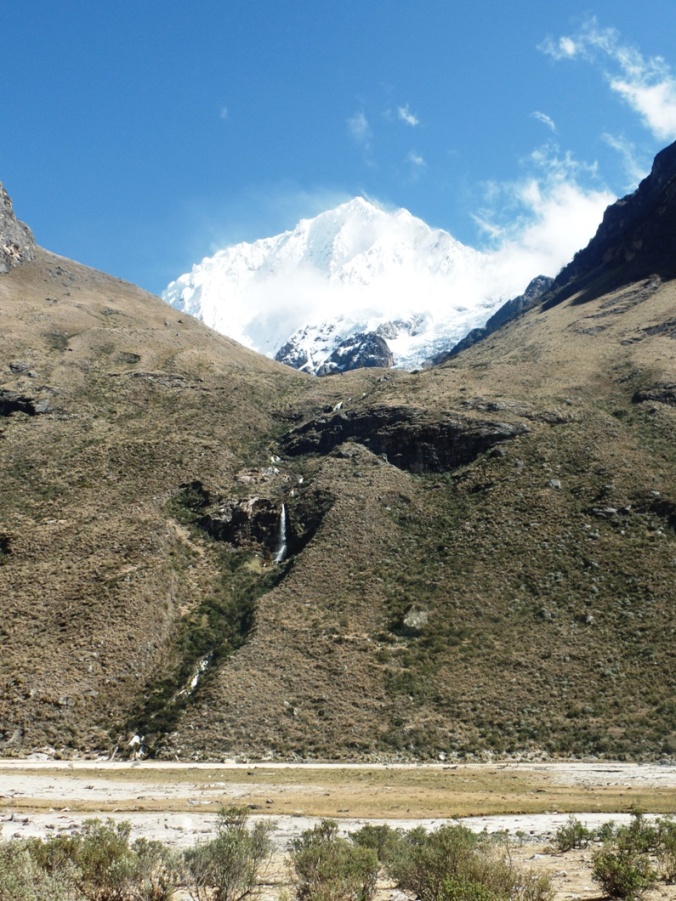 At some point, Simon and I parted ways. He wanted to camp by the river and relax for a day before returning to civilisation, whereas I decided to keep on going. Cashapampa was only a couple of hours away, and the weather had cleared. I wanted to see the rest of this valley while the sun was still shining and it was at its most picturesque. 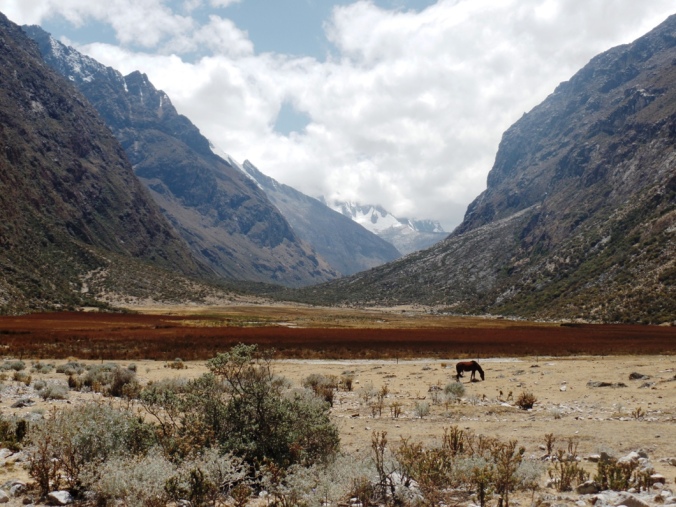 I reached Cashapampa in the afternoon and bumped into a tour group who had just finished too and were having a celebratory drink outside a hostel. They had space on their minibus heading back to Huaraz and offered me a ride.

For more photos from the Cordillera Blanca, click here.